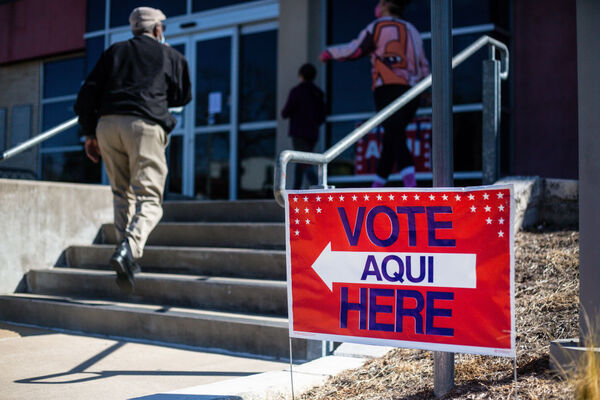 Texans Head To The Polls In Nation's First Primary Election by Montinique Monroe is licensed under Getty Images North America Getty Images
Photos by Getty Images
A former Democrat Representative was just sentenced to 30-months in prison, which is certainly *shocking* news following years of assurances from the mainstream media that such a thing never happens.

According to the Daily Caller's Trevor Schakohl:

Michael “Ozzie” Myers, 79, had pleaded guilty to conspiring to illegally vote in a federal election and deprive civil rights, voting records falsification, bribery, obstruction of justice and orchestrating ballot-stuffing schemes in Pennsylvania’s 2014, 2015, 2016, 2017 and 2018 elections, the office said. He was a U.S. House member from 1976 to 1980 before being expelled for bribery and sent to prison for three years after the FBI exposed him.
Michael Myers, who has no relation to the antagonist from the 1978 film Halloween and has never stared as Austin Powers, was also assigned three years supervised release and fines of $100k in the most recent case.
Myers bribed then-Philadelphia election judge Domenick J. Demuro to stuff ballots in support of specific candidates, according to a 2020 indictment. Demuro pleaded guilty that year.

If this is the first time you're hearing about this case, you're not alone. Back in June, Dan Abrams, who is ABC's chief legal analyst and also known for hosting shows including Live PD and Court Cam, covered the case, and noted while doing so that the story had been entirely by the mainstream media.

"Election fraud is real. It happens, and it often gets prosecuted. As it should. And there's a really big case that just happened with not a single mention on any major news networks," he introduced the segment.

Myers' sentencing has naturally also generated scant media attention - and you can expect the story to disappear from the mainstream media by the end of the week.